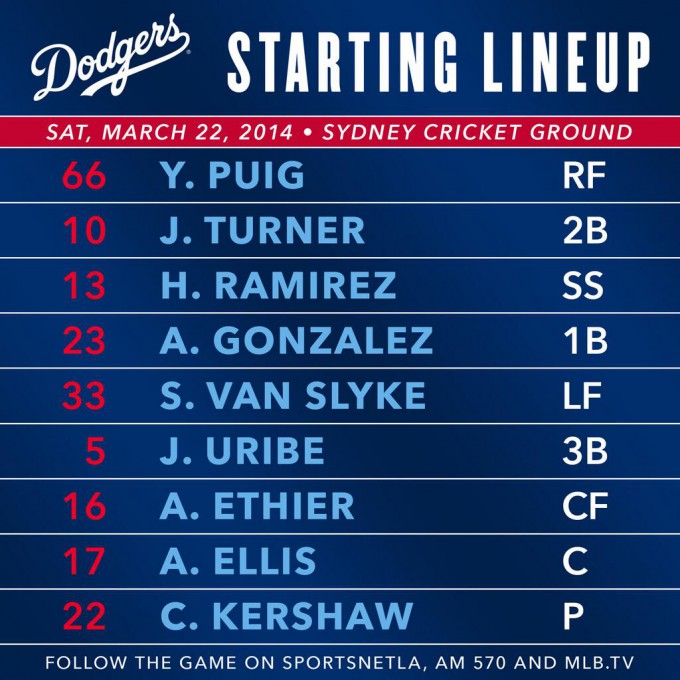 Let’s start with who’s in and who’s out. The biggest thing to look at here is that Justin Turner gets the nod at second base. But what does that mean? It means that Dee Gordon beat out Alex Guerrero for second base, at least in terms of getting the first shot at it. But how you ask? Arizona is starting a lefty in Wade Miley and that means Donny Baseball is loading up on right handed bats to counter that. Dee Gordon is a lefty bat so he’s out, and then it comes down to Turner, Figgins, and Guerrero. I believe Turner got the nod over Guerrero and Figgins because he’s had actually a pretty great spring both in the field (1 error in 40 chances at 4 different positions with the error coming at SS, the most demanding position) and at the plate (.355 / .447 / .484). Figgins figures to be a true utility man gives the Dodgers a lot of options because of his position versatility. I expect Guerrero to be a bat off of the bench if need be and could even take over for Turner in a double switch if the situation calls for it. And Dee Gordon’s speed off the bench can be a game changer if we need to swipe a bag in the later innings. So with that all said, barring any crazy things happening down under for the first game, I would expect to see Dee Gordon and perhaps even Chone Figgins in the starting lineup for the second and final game in Australia when the Dodgers will be facing righty Trevor Cahill.

The only other oddity that I see in the lineup is Stache Van Smash in the 5-spot to protect Gonzalez in front of the Uribear. I would prefer the veteran bat of the Uribear to provide better protection to Gonzalez, plus he’s also got slightly better numbers against lefties, but we shall see.

And one more thing to put into category of “here’s some stats that may or may not have any bearing on actual results in a live game”, Andre Ethier with his dreaded lefty weakness is 4 for 14 against Wade Miley batting in the 7 spot, the only other active Dodgers with better numbers than that against Miley? Matt Kemp (5 for 12) and Dee Gordon (3 for 9). Baseball is great.