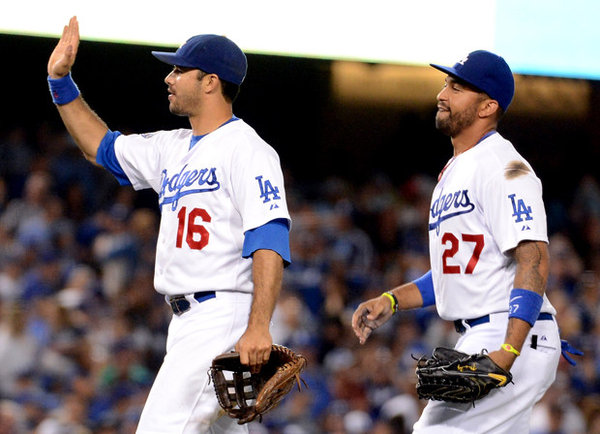 This season started with a line-up that was filled with IFs.  IF James Loney could return to his .300 form and find his power…  IF Andre Ethier could stay healthy and remain productive throughout the year… IF Matt Kemp could repeat his performance from last year… IF Juan Uribe could find his 2010 swing… IF Dee Gordon could step up and have a breakout year.  After all these IFs, the Dodgers were finally blessed with some certainty in the new ownership led by the face of the operation and long-time LA legend Magic Johnson.  The new ownership has a very blatant “win now” approach and the line-up no longer has any IFs, ANDs, or BUTs about it.  They’re stacked.  So what’s the cause of this offensive drought?  I blame the order.  Don’t get me wrong, I have the upmost confidence in Don Mattingly as a manager of the club, but when thrown so many new pieces in such a short amount of time it can be difficult to find a combination that fits, especially when trying to handle as much talent that is in the line-up right now.  Don Mattingly’s latest lineup looks like this (give or take here and there depending on certain match-ups, but for the most part):

There’s immediately a few things I see wrong with this line-up.  First, Andre Ethier is in the 6-spot.  Really?  One of the Dodgers’ main RBI-men and one of the more clutch hitters on the team is going to be getting less at-bats that far down in the line-up and will ultimately hurt the team.  Second, we don’t have a true lead-off hitter.  And before you try to correct me and say we have Victorino, he ain’t Shane Victorino of the Phillies, he’s very obviously declining and his OBP is barely over .300 (which is why Don has put Ellis in front of him).  But with that said, you can remedy both of these issues by dropping Victorino down to the 8-spot.  Too many times, the bottom of our order will manage to start a rally and turn over the line-up, only for the top of the order to squander the opportunity.  Mark Ellis will give you a quality at-bat, sure, but to have him in a position where he’s going to be driving in runs on a regular basis is too much to ask of him.  We need to move the core of our line-up to the top of the order to give them more at-bats, and to have them up to bat when there are men on base to drive-in.  I don’t think anyone will complain if the person that is expected to be up with men on base are getting their chances.  Here is my proposed lineup:

Why I like this line-up:  Mark Ellis has been doing all right at the top of the line-up in the absence of a true leadoff man.  If he does get on base, Hanley Ramirez has the power to advance him along as well as the speed to stay out of a double play.  If Ellis fails to get on base, Hanley Ramirez can start a rally of his own with an extra base hit, or turning a single into a double via a steal.  At this point, Andre Ethier and Matt Kemp are poised to be up with men on base just as we hoped for.  If the bottom of the line up is able to start something and the order turns over you have Mark Ellis at the top to give a quality at bat to move runners over and then you jump right into the core of the line up to drive them in.  Or if you want to get even more radical: