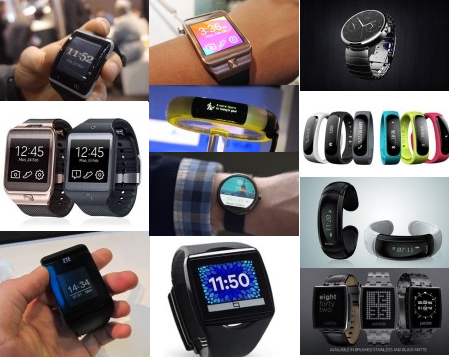 Calling it a Smartwatch Does Not Make it Smart

Google last week unveiled Android Wear. Along with this, Motorola teased their Moto 360 smartwatch. CES 2014 was filled with wearable tech, most notably a plethora of smartwatches. This landscape is all too eerily similar to “smartphones” circa 2006:

Now I’m not going to speculate that Apple has the magic answer for this mess of a landscape, but the feature set of these smartwatches paired with UI of a terribly small screen, and the design challenge of making any piece of wearable technology attractive is a hell of a tall order to fill to get it right.

One of the next offenders is the fact that nearly all smartwatches are suffering from a huge issue in the area of battery life. If you’re going to ask a user to have another device with them at all times, along with the fact that it is meant to be worn at all times, battery life must be solved. It is too impractical to need to ask the user to charge this device on a daily basis along with their smartphone. I’m no battery technology expert, but this is a roadblock that must be taken care of before the “killer” smartwatch can exist.

Also in the category of smartwatch makers missing the mark, is the fact that very few are actually taking advantage of the fact that it is being worn. If you ask me a smartwatch needs to also act as an activity / fitness tracker, but, and this is a huge condition, it needs to be seamless. The experience needs to be top notch and needs to be as automated as possible. One product currently raising money (and killing their goal) for an automated fitness tracker is the Healbe GoBe. Again, don’t get me wrong, I think that even the Healbe GoBe is an offender in other categories, but in terms of the automated fitness tracking, under a very large assumption that it works and has a proper user experience, it’s got the right idea.

Lastly, and the most subjective criticism I have, in terms of design there isn’t a single smartwatch I have seen that I would want to wear. From size, to bulk, to material quality, to overall design, they look terrible.

Now I don’t claim to have the answer to this market, but it is very obvious that a slew of technology companies have invested large amounts of time and money into smartwatches as the next logical progression from smartphones. But to me, that ain’t gonna happen until we have one that addresses (at the very least) the issues I’ve mentioned here.