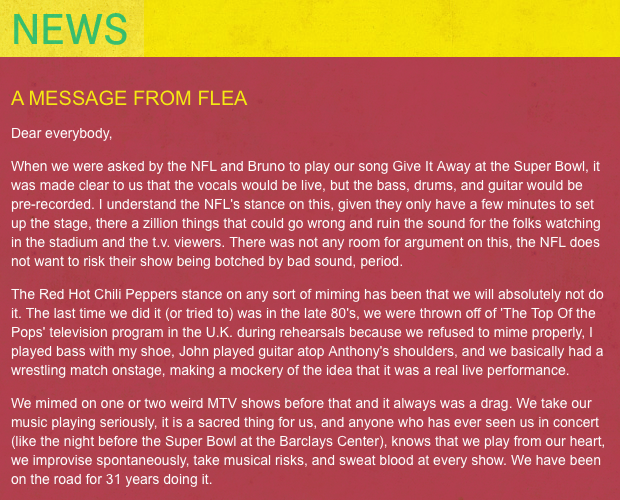 Barking Up The Wrong Tree

Music fans, RHCP fans, and even football fans were outraged that the half-time show of Super Bowl XLVIII featuring Bruno Mars and the Red Hot Chili Peppers had all instruments miming to a pre-recorded track with only vocals being performed live. There is an outcry of fans who are in disgust with RHCP over this “controversy”. The fact that a fan would place blame and hatred upon any musician for something so trivial is beyond me (particularly when the artist in question is the likes of RHCP who has been making and playing music for over 30 years).

Flea has since released an open letter explaining the situation which I would imagine has diffused some of the high-alarm opinionated individuals out there, but my large question is why is no one up in arms at the NFL for this? In Flea’s letter he goes on to explain that “it was made clear to us that the vocals would be live, but the bass, drums, and guitar would be pre-recorded” and that “There was not any room for argument on this, the NFL does not want to risk their show being botched by bad sound, period”.

This ultimatum is the real problem here. The NFL gave RHCP a stance of play at the halftime show our way, or don’t do it at all. Yes, they could have declined, but as Flea mentions it’s a once-in-a-lifetime opportunity and they were interested in doing it to have fun. RHCP made the best out of the situation that they were given. Granted, their experience, the fan’s experience, but certainly not the NFL’s experience, would have been much more fulfilling, entertaining, and musical had they truly played live, but I just can’t understand the concept of fans being disgruntled and/or angry at RHCP for this when they really ought to be angry at the NFL for providing such rigid circumstances with no give.

So to all the angry RHCP “fans” out there, and the NFL: grow up.