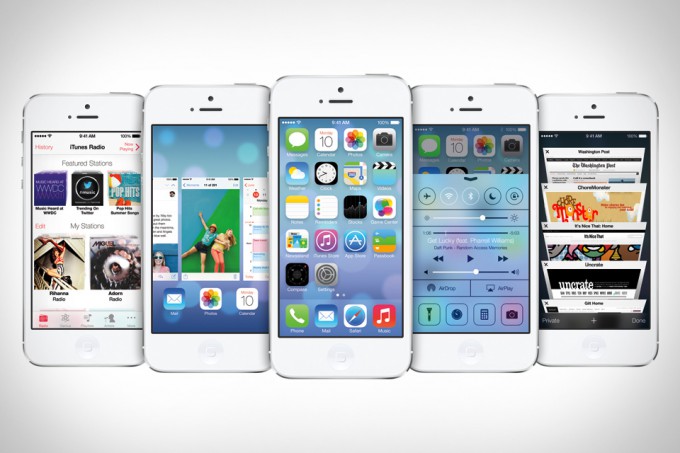 A Week With iOS 7 (Developer Preview #1)

Let me just start by saying that I will reserve my official judgement of iOS 7 as whole until the public release later this year.  And that the opinions expressed here are solely based on developer preview #1 released shortly after Apple’s WWDC keynote.

With that said, what a piece of garbage.  I can go into detail about the visual design, how iOS has lost it’s elegance that it once shined above other mobile operating systems, or how the icons are just objectively god awful.  But what I want to focus on the most is how the visual design makeover has ruined the functionality and intuitive experience if iOS.

The new lock screen features a minimalist clock, date, a down arrow at the top of the screen to indicate how to pull down to display the notification center on the lock screen (an iOS 7 addition), an opposite arrow on the bottom to indicate the control center (also an iOS 7 addition), the camera icon in the lower-right corner, and the words “slide to unlock”.  Previously the “slide to unlock” words were written inside of a very obvious track along which the user would slide the button designed with an arrow icon.  There’s no way anyone could possibly mess that up, everyone knew what to do.  With this lock screen, you now get the words “slide to unlock” directly above an arrow pointing up.  If you slide upwards, however, you will get the control center, not the unlock action.  If you slide right-to-left, nothing happens.  The only way to unlock is to slide left-to-right, given it can happen anywhere on the vertical space of the screen, but the intuitive action for someone seeing this screen for the first time is undoubtedly going to be to slide up… because there’s an arrow pointing up next to the words that say “slide to unlock.”

But I’m just getting started and we’re still on the lock screen.  The once convenient action of getting to my camera quickly from the lock screen is now also plagued by the control center swiping action because it is identical to the gesture needed to reveal the camera application.  Don’t get me wrong, control center may be one of the best features in iOS 7, but this is a pure example of how this “great” redesign has ruined functionality and intuitive experiences.

Next I’d like to take a minute to talk about something I haven’t found anyone else chattering about.  The wallpaper.  Sure, everyone’s talking about the cool parallax effect when the phone moves, and sure, I’ll give you that because to be honest I’m a bit indifferent about the effect… until I realized one detrimental thing about it.  When I first booted up into iOS 7 I noticed that there was something off about my wallpaper, both on my lock screen and home screens.  I set it to the default “space” still image that came with iOS 7 and thought nothing of it, but this morning I went in to change it back to my picture of my dog and performed the move and scale to get it just right.  When I exited out to my lock screen however, the image was zoomed in further than what I had set it to.  I thought I may have messed up the zoom at the end so I tried again, but still got the excess zoom.  I then chalked it up to a beta bug, but then as I was putting my phone down, noticed that the parallax exists on the lock screen as well and that’s when it hit me.  iOS needs to zoom the picture in further than what the user sets because it needs extra space on the image to display when the phone is shifted for the parallax effect. This completely negates the moving and scaling that I did to get the wallpaper to look how I wanted it to look.

Since it’s taken me this long just to get past the lock screen I’m going to reserve the rest of this article for the further issues with iOS 7, but rest assured there are plenty of them and I will be adding more as I have the time to document them.  I’d also like to point out that this is definitely the buggiest beta version of iOS I have used, and I have been installing the betas since iOS 5.  That may speak towards the fact that it can only get better… so here’s to hoping.